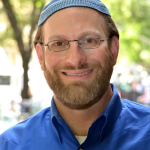 Rabbi David Kalb is the Rabbi of Jewish Learning Center of New York (JLCNY) where he is responsible for the creative, educational, spiritual and programmatic direction of the organization. He is committed to open mindedness and likes to work and learn with the entire Jewish Community and beyond, by linking tradition with modern experience. His goal is to bring Judaism into all aspects of life, believing that Judaism has to be a holistic experience that can operate in the real world. Rabbi Kalb approaches scholarship as a living part of Jewish experience.

In addition to his work at JLCNY, Rabbi Kalb has served on the educational advisory board of the WNET/BBC documentary ‘The Story of the Jews.’ He has also been an adjunct faculty member at Touro College. He has lectured at a number of different synagogues, federations, Jewish Community Centers and institutions including the Chautauqua – Everett Jewish Life Center, Samuel Bronfman Foundation, the Wexner Alumni of Metro North New Jersey, the Skirball Center, 92nd Street Y, JCC of Manhattan, Limmud NY, Limmud UK, Alma NY, Lishmah NY, and the Florence Melton School. Rabbi Kalb has spoken at the Adam Clayton Powell State Office Building in Harlem. He has also spoken at the Hudson River Museum in Westchester.

His articles have appeared in the Huffington Post, Jerusalem Post, Haaretz, New York Jewish Week, JTA, the Jerusalem Report, Manhattan Jewish Sentinel, Long Island Jewish World and the New Jersey Jewish Standard. He has also blogged for Jewcy.com. He has directed a number of research projects and developed curricula for a variety of diverse Jewish institutions on politics, education, social action, Israel, Zionism and end of life issues.

He was a member of the Synagogue 3000 Working Group, a select group of Jewish leaders who are committed to the establishment of transformative spiritual communities. Rabbi Kalb was one of 30 Jewish leaders who were chosen to participate in The NYConversation – Jewish in New York, sponsored by The New York Jewish Week, The Conversation is a project in which Jewish leaders from very diverse backgrounds talk about the future of Jewish life in New York and what it means to be Jewish in the 21st century. He has also participated in Jesna’s FutureTense Roundtable, a forum for important leaders in the Jewish community.

Rabbi David Kalb is an activist.  Not one to just “talk the talk,” he puts himself on the line. An advocate for social justice he connects spirituality and scholarship with social action. He has protested on behalf of both Jewish and general causes. Rabbi Kalb believes that being Jewish means taking a stand, and has appeared on and in major national and international media as a voice against intolerance. He has also been involved in homeless shelters, soup kitchens, food pantries and in environmental activism and advocacy.